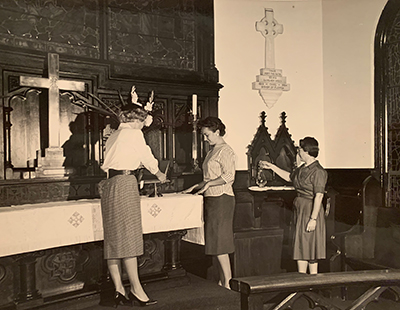 As the first Protestant Church in Florida, our past is long. Mirroring the events of our nation and the story of St. Augustine, Trinity’s story forms a two-century offering to the Glory of God. Located on the plaza in downtown St. Augustine, Trinity Parish was established when Florida became a territory of the United States. Our founding missionary, the Rev. Andrew Fowler, arrived in a yellow fever epidemic. Fowler’s replacement, Rev. Mellish Motte, incorporated the church in 1823 and, in 1825, convinced the town’s new American Government to give them the old Roman Catholic bishop’s lot, since the Catholics had utilized the old Anglican minister’s home as the site of their Cathedral. In 1827 an Act of Congress secured the lot for Trinity in perpetuity. The first church building was begun in 1830 and services began on June 30, 1831. Constructed of coquina, a local shell stone, the original structure was 36 feet wide by 50 feet long. Bishop Nathaniel Bowen of South Carolina formally consecrated it on June 5, 1834, the year windows were first installed.

Growth was slow but steady in the following years and small additions and improvements were made to the church – many of these paid for by various fairs and fund-raising activities organized by Trinity’s church women. A bell was procured from Holbrook foundry, the successors to Paul Revere, in 1842 and a marble font was donated the same year.  The first three stained glass windows were added just prior to the Civil War. Although there was little actual fighting in Florida, the Civil War took a terrible toll on the state, the Diocese of Florida, and Trinity. Although St. Augustine was a small town, the final Confederate army General, Edmund Kirby-Smith surrendered his sword to Union General, Edmund A. Davis. They were both baptized at Trinity Parish.

The next half-century saw a slow recovery by St. Augustine and Trinity, with continued work by a committed laity that continued to raise funds and keep the church going through a succession of Rectors. In 1895, with the arrival the Rev. C. M. Sturges, it was determined that the church building was outmoded, too small, and in bad condition. They began a six-year effort to obtain plans and funding to enlarge the structure. Work began in early 1902 and the first services were held in the “new” church, a cruciform structure, on January 17, 1903. Neo-gothic in appearance, the church with forty parishioners built a church that seated 300. A new era had begun.

The Twentieth Century brought profound changes to the Oldest City including a substantial increase in population and a steady rise in winter visitors – many of whom chose Trinity as their church. The Reverend L. Fitz-James Hindry served as Rector from 1904 until 1936, our longest tenured leader.

In 1949, the Rev. Charles Seymour was called to Trinity and served until 1964. By 1955, a two-story education facility and Parish Hall were added. The Seymour years were a time of significant physical changes to Trinity and marked an upturn in the number of communicants to more than 500 by 1959.

In 1960, after a successful stewardship campaign, Trinity Church went from a relatively small church to a fully realized complex with a new parish hall, kitchen, classrooms administrative offices and a nursery. Architecturally, the new facilities and cloistered walkways complemented and continued the neo-gothic features of the historic church building. In 1966 an Aeolian-Skinner organ was added.

The 21st century finds Trinity once again moving forward to serve a growing congregation and the community. With the recent purchase of the building adjacent to the church (Trinity Hall), Trinity has entered a period of exciting growth and spiritual renewal.